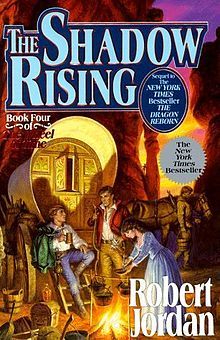 This is book #4 of the legendary Wheel of Time series. See my reviews for the first book, the second book and the third book.

Warning: Spoilers for the previous books, since it’s inevitable when reviewing series, especially a long one like The Wheel of Time.

It took me forever to start, since SPFBO and some new releases came along. I have missed whe WoT world until I finally got to reading The Shadow Rising.

The beginning chapters are dynamite, featuring the girls and Mat’s gambling with fireworks. Things get pretty interesting. I found some of the early parts featuring Egwene, Nynaeve and Elayne a bit too slow, but it picked up in no time. The Shadow Rising features the most stunning part I have seen in the series so far: The history of Aiel through Rand’s perspective. That is one of the coolest things I’ve read in fantasy.

Now let me say a few things about the characters. Character development didn’t fall short of my expectations. I was hella annoyed with Faile in The Dragon Reborn and found her repulsive, but she actually grew into a super cool figure. Kind of reminded me of Mike Fletcher’s unlikeable characters you love in the next book (the books are Beyond Redemption and The Mirror’s Truth for the unitiated.)

Pining romance is one of my pet peeves in fantasy and it annoyed me in a few places, but it was hell of a lot less than the previous volumes, especially the Game of Houses stuff. I gotta say I missed the political intrigue, there was some political intrigue in this book but not nearly enough. The other badass scenes more than made up for it, though, so no complaints there.

I loved Elayne’s and Faile’s character development above all else. The amazing detail of new places, cultures and especially the Aiel parts were great. There are some crazy twists that left me with my jaw hanging open. Robert Jordan’s storytelling is ever so impressive. Tanchico was far grittier than any other city in the previous books, not just the setting but the politics and the relations between different groups.
The Shadow Rising is quite a bit darker and just as intense, and I have a feelings things will get darker still.