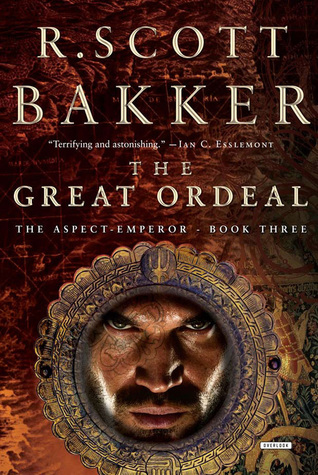 The White Luck Warrior (book #5)
To be honest, after that mind-blowing epic ‘slog of slogs’ Cil-Aujas adventure in The Judging Eye and its just as epic conclusion in White Luck Warrior, I didn’t expect anything to top that. Boy was I wrong! The mind-blowing levels went up in the Nonman mansion Ishterebinth parts. The long-abandoned Nonman abode in The Judging Eye was bone-chilling creepy and amazing, and the inhabited Nonman mansion here is even more awesome and unimaginably grimdark in its macabre majesty.

The Great Ordeal delivered more than I expected. There are several POV threads and plot arcs as usual. I had a hunch that Sorweel was going to get better from the very first encounter, and it did. Sorweel’s character development dials up to 11 and it was the most impressive slow character development I have seen since the first three books of Wheel of Time. But more on that later.

Esmenet parts were going between glory and pathetic tragicomedy. Her ability to hold the things together after the power vacuum caused by the long absence of Kellhus and the assassination of Maithanet -which she engineered- and how she ‘talks oil’ to control the imperial dignitaries and the Thousand Temples apparati is impressive, while her complete ignorance of her youngest son being a bloodthirsty, diabolical psycho makes it tragicomical.

Kelmomas is following the mysterious White Luck Warrior around the palace, as you follow him through the POV of Kelmomas, the inscrutable motives and inhuman qualities of the so-called divine assassin casts a strong aura of suspense and horror. White Luck Warrior is enigmatic and scary, following him from the eyes of a murderous little psycho brat and seeing his awe and fear for the inhuman assassin was a great deal of fun to read.

Some folk found the Great Ordeal marching parts unnecessarily long and dragging, but I beg to disagree. In the end of The White Luck Warrior, Kellhus gave the order to feed on the horribly tainted Sranc meat, and this brings a whole new macabre aspect to the already creepy plot enshrouded in Lovecraftian horror. I can’t say any more without wading into the spoiler territory, but it shall suffice to say these parts are grisly and haunting, spiced with battle action and savagery darker than the previous books.

There are some cool twists and turns, which I didn’t see coming even after reading all of the books. Kellhus became inscrutable and his parts through the POV of Proyas, as well as the very small POV of his own are so twisted and weird, it is hard to determine his motives at that point. Proyas is quite different from the one I know from the Prince of Nothing, he has sacrificed a lot and changed quite a bit.

But my favorite without question was the Ishterebinth chapters. The true extent of the doom and suffering of Nonmen is laid bare in a most tragic way. The emotional intensity rivals that of Robin Hobb books, and Sorweel’s deep understanding of the Nonmen -against whom he has been prejudiced for a lifetime due to his cultural conditioning- through a magical artifact, seeing their past through one of their own minds and being a witness from the point of view of two souls is incredibly sad, haunting and deep. Current condition of the last standing Nonman mansion, beautifully woven with flashbacks giving glimpses of its past glory is perhaps one of the most touching parts after Cleric’s reactions to Cil-Aujas in The Judging Eye.

All in all, The Great Ordeal is a superb book and sets the tensions for the upcoming Unholy Consult while resolving a good deal of threads and raising new ones.

I am not too happy about the fact that this whole series is so underrated despite its superior literary quality, impressive depth of characters and incredibly detailed and original worldbuilding. One thing I found truly mind-blowing is the whole series being pure epic fantasy without being derivative at all. Some core tropes of epic fantasy in fact exist, but you need to look long and hard to recognize any of it.

What can I say? I will be counting days until my pre-ordered copy of The Unholy Consult arrives on my e-reader!