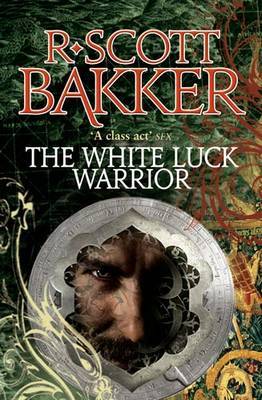 I can’t tell you how much I loved this book! The White Luck Warrior reads more like the continuation of The Judging Eye than a “bridge book” of a trilogy in my opinion.

The White Luck Warrior answers some of the questions raised by The Judging Eye while raising new and deeper questions. The three main story arcs from The Judging Eye continue, and there is one new POV character: The mysterious and supernatural-sounding White Luck Warrior, who is sent by the goddess Yatwer, or the Hundred Gods in a broader interpretation, to slay Aspect-Emperor Kellhus. White Luck Warrior’s chapters are few, but quite intense. He seems to move in a time warp, seeing the timeframe from a non-linear vantage, kind of like the Dûnyain probability trance on steroids.

As Mimara’s Judging Eye opens and she sees the extent of everyone’s sins and damnation, you begin to realize how crappy the gods are. The scalpers are horrible scum for sure, but Achamian is overall a good guy and he appears as damned as the band of cutthroats, which includes a child rapist. He is damned cause he is a sorcerer and sorcery is an abomination in the eyes of these wrathful gods.

This made me question the legitimacy of the motives of the gods: They are after killing Kellhus and his progeny, but is it because Kellhus is a heartless bastard manipulating the population of the entire Three Seas for power, or because they are unable to see the No-God and Consult’s motives, which is going to bring the Second Apocalypse and decimate the entire population of the world, and Kellhus happens to see further than they can? Kellhus may not be the good guy, but he is warring against the ultimate evil forces which are about to decimate the mankind. We already know the amount of blight and ruin they heaped during the First Apocalypse from Akka’s narrative and also the ruins of cities various characters encounter during their journeys.

Which also made me question the legitimacy of Akka’s motives. Akka is on a quest to uncover the Dûnyain origins of Kellhus to undermine his power. Akka is also the sworn enemy of the Consult and spent a lifetime hunting their agents, his life was dedicated to prevent the Second Apocalypse and the summoning of the No-God by the Consult. Did he abandon this lifelong quest along with the School of Mandate? I have a hard time to believe that, it’s so illogical. The rational thing would be to wait until Kellhus launches the offensive on Golgotterath and puts an end to the horrendous and vile Consult. I sure as hell hope that’s what Akka is planning.

On the other hand, abhorrent and revolting as they are, the Consult is going to save the souls of everyone from damnation if they succeed with their plan. Even though they will reduce the world’s population to 140.000 souls, all those who die won’t be damned for eternity. Which means horrible criminals, murderers and rapists will get away with their heinous crimes, but the good people damned cause of the stupid and petty whims of gods will also be saved. It’s really a catch 22 situation. Gods are not so much better than the Consult and its horrible No-God, it seems, and they are loath to dole out salvation even to those who deserve it for having good hearts.

Akka and Mimara’s epic “slog of slogs” with the scalper band continues on, the party is now reduced greatly after the battles in Cil-Aujas, and they trek on into the great, gloomy and extremely creepy forest called the Mop. Like the awesome Cil-Aujas journey, the Mop reads more like Lovecraftian horror than epic fantasy, but it is still one hell of an epic fantasy. Cleric, who was my #1 favorite from The Judging Eye (I know, I’m weird. Don’t judge!) became even more fascinating, and his sermons got more intense. His rationing of Qirri becomes sort of a religious ritual, and from Mimara’s point of view it was quite a delight to read. Like the Judging Eye, Cleric parts were awe-inspiring and a great delight to read. Nonmen are truly fascinating.

Speaking of Mimara, her inner strength and resilience becomes even more impressive in this book. The horrible band of cutthroats now see her as one of them and show her respect, which is no mean feat. Some people complained about her being a former prostitute, but like I said before I have no problem with such things and I don’t judge sex workers. Mimara’s flashbacks to her life in the brothel and how she learned to deal with the harsh aspects of life were great to read. When shit hits the fan, she grabs her sword named Squirrel and hews the bad guys like no tomorrow! I am not a feminist per se (or more like a classic style feminist, not the Tumblr 3rd wave kind) but I see absolutely nothing wrong with Mimara from a feminist point of view, either. She is the strong female character who perseveres where big burly dudes die like flies, she has native intellect and peculiar strength of character.

The Great Ordeal arc got more interesting from Sorweel’s point of view, and Sorweel’s bonding with Zsoronga as brothers was great. Zsoronga is a great side character, with his snarky comments and attitude. There were some cool twists in that arc, and Sorweel truly grew on me in this book. The Sranc hordes keep massing up before the advancing Great Ordeal army, and the enormous amount of dust they kick into the air while they move along the arid Istyuli Plains in their tens of thousands create a huge curtain of dust the people call the Shroud, it lingers in the air all day, blocking the horizon and the Sranc hordes, and it kept lingering in my head even after I put the book down, much like a Lovecraftian horror element.

All the skirmishes and epic battles, especially those involving the sorcerers and the witches were such a great show. Sorcery visuals would be amazing to see on the big screen, if the movie producers realize these books are the real deal and make them into movies in my lifetime.

Esmenet and Kelmomas threads in Momemn got legendary level epic with some neat plot twists. Kelmomas is a little psycho brat, not just the kind of psycho you hate with passion like Joffrey from Asoiaf/Game of Thrones, but the kind of psycho that creeps the hell out of you on top of being an awful creature you hate. He is downright scary. Theliopa is ever so interesting, too bad she didn’t get more page time. She is perhaps the most likeable Dûnyain out there.

I particularly liked the Esmenet parts, and felt sorry for her. I don’t see why many fans of the series dislike her, I think she is a great character. She has some rather annoying aspects and weaknesses, but overall she is quite rich, realistic and does hell of a better job keeping the empire together than any of her critics could.

The ending chapters were pure badassery featuring one of the most epic fights I have read in fantasy, Robin-Hobb tier emotional depth and the Silmarillion-esque aura which made me think of the journey of Beren and Finrod Felagund. This one made me literally weep.

There is one other arc which involves the Fanim attacking the now weakened empire and the Zeümi diplomat Malowebi. That is a rather intriguing POV character, and then there is Meppa, the last Cishaurim and his awesome power. I really liked Meppa, despite him being a Fanim heretic. Second Negotiant Malowebi is craven and can get annoying at times, but interesting nonetheless.

You are missing out a damn lot if you aren’t reading this spectacular series. It is one of the best things that happened to the fantasy genre, and it is as addictive as ASOIAF but with a smaller cast of POV characters and a much more manageable number of plot threads.

This series is worth reading, not only for all the badassery I have detailed in my reviews so far, but also for the sheer hilarity of the Second Apocalypse jokes being produced by our beloved fan artist Quint von Canon, such as this fine piece of work here: http://quintvc.deviantart.com/art/So-Much-Loss-581469142

This one made me fall off my couch and laugh until I couldn’t laugh anymore.