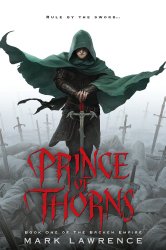 This is not your typical fantasy book. This is something completely different and it’s certainly not for the faint of heart. If you like grimdark, Mark Lawrence is your man. If you read my reviews you will know that I don’t easily give out 5 solidus ratings. This is one of the very few books in the fantasy genre which gets the full marks from me. (No wonder it got reviews from big shot famous authors on Goodreads!)

The prose is simple, there is no fancy vocabulary or elaborate descriptions yet it’s very powerful storytelling -incredibly powerful and realistic. The book (as the rest of the books in the series) is written from the point of view of Jorg Ancrath, who is not a hero, not even an antihero, but a pure villain. Jorg is a cruel, heartless, vicious boy who spent 4 years of his childhood with highwaymen pillaging, raping and mass murdering. This book is a fresh breath in the fantasy genre. (Ok it sounds kind of weird to write this sentence after mentioning the pillaging, raping, mass murdering evil guy, but there is so much more than this… Trust me, you will understand if you read the book!)

Oh there are fantasy elements such as dark sorcerers, necromancers and mutant monsters, but it’s still extremely realistic.

If you are tired of the cliche heroic good guys, here is your chance to see the world from the eyes of a villain. It’s no easy feat to write from the POV of the bad guy -I’m a writer myself so I know- and Mark Lawrence has done a brilliant job of it. The story takes us into the world and the depths of the mind of a world class sociopath. Jorg’s philosophical muses and world view are reflected really well.

The book is action packed, but it still has some philosophy, which I value in fantasy literature. There are also some rather unexpected ‘surprises’ which were deftly weaved into the story, I am not saying more for the sake of keeping this review spoiler free but it deserves the bonus points for the excellent originality. Character development is well done, even though there isn’t much dialog with some of the supporting characters, Jorg’s thoughts and memories about them gave me a very clear picture.

Kudos to Mark Lawrence for creating something original, not using the traditional fantasy tropes and giving us the POV of the bad guy.

22 thoughts on “Book Review: Prince of Thorns by Mark Lawrence”